Chinese food has come a long way in the capital, as we have written. The limp old ducks hanging in the windows of Chinatown have been replaced with eager Chinese tourists, slurping down soup noodles which pass their stringent authenticity tests. As we've written before, Chinatown has gotten better, a lot better, and better still, it's still cheap and cheerful.

But Chinese food, one of the world's great cuisines, certainly can go up-market. Chinese cities today are alive with high-priced, high-experience restaurants, built into elegant spaceswhere skilful waiters glide around with trays of exquisitely crafted dishes. I'm not talking about the trendy Shanghai joints with loud music, beautiful clientele, and fumbling drug-soaked management -- I'm thinking of a few Beijing places I've been to, artfully set into old courtyard houses, filled with people-who-would-know a good dish when they see one.

In London, we have had a few expensive Chinese places, but most of these have been of the stylish variety, with the focus on the scene, not the food. Now we have one of the latter variety. 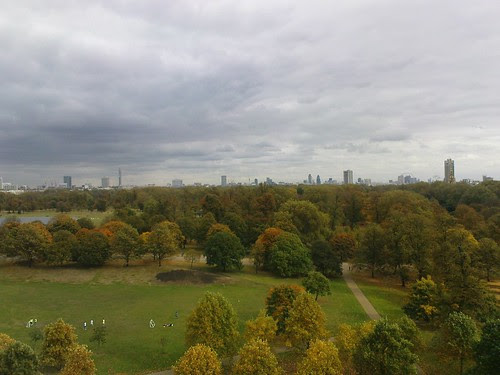 Enter Min Jiang. It's far from unpleasant, and not at all stodgy, just a little understated. The setting, on the top floor of the Garden Palace hotel, is actually one of the best of any restaurant I've seen -- fantastic views of Hyde Park to the east make it a perfect high-end lunch spot.

The food, I must say, was excellent. We opted to wait it out for a Peking Duck, which took the full 45 minutes we were told it would (it's possible to order ahead). When it came, it was quite worth it -- undermining my theory that Peking Duck is never good in restaurants that specialize in it. It was carved at our table side, and served sliced with thin flour pancakes and a variety of toppings beyond the usual hoisin and scallions. The skin, carved off to be eaten with sugar as a appetizer, was excellent.

I was also quite impressed with the xiao long bao, or soup dumplings, to the point where I re-ordered them. Soup dumplings are classic Shanghai cusisine, and Peking Duck, is of course, from Peking (Beijing) -- so Min Jiang is not true to a specific regional cuisine. This is unfortunate, since the Chinese cuisines do vary quite a lot and consistency is important to their enjoyments (imagine a meal of German wienerschnitzel paired with a Sicilian Caponata). I suppose this can be forgiven in a city with a dearth of high-end Chinese of any description.

The only real downside is the price, which like everything in London was too much. £50 for duck is a lot, even for a good one. And any one familiar with the very decent dim sun joints of California or New York will find the cost of a meal at Min Jiang absurd -- £6.50 for THREE xiao long bao?? It should be a quarter that. But no bother -- for a very occasional treat.

On a Friday four months after opening, Min Jiang was about half-full. It has the same owners as the hotel which occupies it (a family from Hong Kong), so perhaps it can survive some slackness. I certainly hope it can, because it is a great addition to the culinary scene.

Loving your blog. Remind me when you're three months old and I'll add a link to you in my sidebar. Have been wanting to try this place since it opened. Thanks for upping it on my list!

Sorry, should have added that I'm http://www.londonelicious.com

Really, you should open your blog to comments from non-Google bloggers!

Hi,
Love your blog! chanced upon it via urbanspoon. I agree that Min Jiang is pretty good and its a shame that very few locals dine here. I didn't think their Peking Duck was all that, but to get better peking duck one would have to travel east.
Anyways I have added a link to your blog on the sidebar of mine. Keep up the good work.