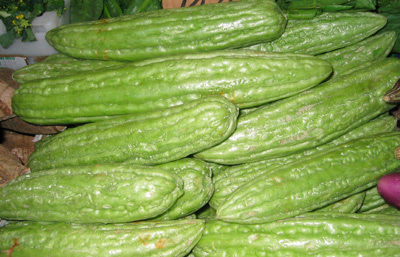 Kerela, Bitter Melon
Name Madhu's
Address 60 South Road, Southall UB1 1SW
Phone 020 8574 1897
Web site http://www.madhusonline.com/
Main dish price range £6-9
Rating 4 Stars. Go there, it's really good.
Recommended dishes Keema Mutter (spicy minced meat), Bhindi Masala, Anything with Karela (such as Karela Chicken)
The Indian food in London is, as a rule, bad. I suppose that this is for the same reason that the vast majority of Chinese restaurants in the States are bad: they are part of a genre defined during the vast waves of immigration of the 60's and 70's, a time when the culinary expectations of the western world were rather bland, and imported cuisines would have had to adapt accordingly to survive.  The restaurants were opened as business enterprises to serve the needs of the mainstream masses, not to recreate authenticity. Also, in both cases many of the immigrants came from regions not particularly known for their food. The Chinese immigrants to the US were mostly from Fujian, and the Indians in Britain mostly from East Pakistan, which is now Bangladesh.

Chinese food in the US has taken spectacular turns for the better in recent years, as waves of more sophisticated upper middle class engineer immigrants have demanded better food and brought with them the waves of distant relatives required to open restaurants which provide it. This can be seen, to a certain extent, in the Chinese restaurants in London as well. But bland Indian food has become so much a part of the British cuisine, that any major shift would be unthinkable. A quality, authentic Indian restaurant would simply not survive in most towns around here because it would not be able to serve in good faith Chicken Tikka Masala, a dish unheard of India.

So, for decent Indian food in London, a would-be eater must retreat for curry shops the center and venture to the suburbs where curry-and-chips eaters give way to authentic South Asians. Southall is one such stop. Twice now on my way to Heathrow I've opted for the "Connect" rather than the "Express" train and hopped off at where the station signs change to Hindi for a brief walk down a street which resembles a non-existent orderly, cold India.

I must confess I've only been to one restaurant on Southall's South Road, because on my second trip there, I could not bear myself to miss out on another  meal at Madhu's, however good the alternative may be. Madhu's is a nice restaurant, with well-intentioned white-linen dining tables crammed just a little too close together. The service is truly authentic  south asian-- friendly, hospitable, and just a little incompentant. The same pretty young hosted seem equally overwhelmed by request for a table both when I had made a booking and when I had not.  The food, however, is excellent.

Madhu's is owned by a pair of brothers who immigrated to England, like many south asians, by way of East Africa. Many Indians fled the de-colonization and partition of India and the subsequent massacres for a more stable life in the British dominions of Kenya, Tanzania, and elsewhere. A few decades later, as those countries gained independence and chaos, the Indian families, retreated further, right into the heart of Britain.

Like most Indians, Madhu and his brother presumably arrived in England with their cultural identity firmly intact, but unusually they picked up a few East African notes along the way, which can be seen in the menu. There's a sprinkling of Afircan names (a "Nyamah" Choma, anyone?), but a liberal use of Afircan ingredients, particulary Kerela, also known as Bitter Melon. It's used in India, but more so in Africa, and as it turns out, it goes great in curry, where it's strong flavor holds up well to the powerful Indian spices.

Overall, I'd say this is one of the best Indian restaurants I've ever eaten in, including the many meals I've had in India itself. The quality of the ingredients is high, the flavors spot-on, and the eclectic menu breathes authenticity. The service and décor is good, but not too good to spoil the "ethnic" experience. Highly recommended.