Name Maroush 1
Address 21 Edgware Rd,Bayswater, W2 2Phone 020 72476400
Web site www.maroush.com
Main dish price range £10-15
Rating 0 Stars. I would seriously rather go hungry.
We had decided only to post reviews of restaurants that we liked on this blog (negative opinions I've been chalking up on urbanspoon.com), but last night I had a truly extraordinary restaurant experience, and I feel a strong need to speak out.
A friend visiting from out of town wanted Lebanese, and I leapt at the opportunity to try Maroush, the flagship restaurant of the chain that includes places I love such as Ranoush Juice and Beirut Express. Indeed, up and down Edgware Road, you're hard-pressed to find a place not owned by the Maroush empire. Maroush is said to be more up-market, and have belly dancing, so I figured it was a safe bet for an out of town guest.
We got there around nine, and after having to be made to feel bad about not having a reservation for 5 or 10 minutes, we were shown into their main dining room, which happens to be in a large, low-ceilinged basement. The place settings are nice, white linen and all that, and the waiters are all in suits, so it was a bit of a surprise to see a DJ pumping out Lebanese hits from a corner of the dining room.
The music was loud, but it didn't seem to bother the large crowd of diners, which ranged from what looked like a large drunken office outing to quite a few middle eastern couples. We had only begun to complain about the loud music when all of a sudden IT GOT COMPLETELY DEAFENING. And it stayed that way, for THE NEXT TWO HOURS, which is how long it took us to get the food. And I mean deafening -- my friend and I put our faces next to each other, and shouted, and we still couldn't here. I almost want to excuse the friendly waitstaff for being so slow, since it was clear that they could not hear what the hell any of their customers were saying to them.
When we finally got our main course (which could have, and probably did, come from the same kitchen as Beirut Express), I got the waiter to bring the bill right away. We wolfed down the kebabs we had ordered, then rushed out of that dungeon, never to return. 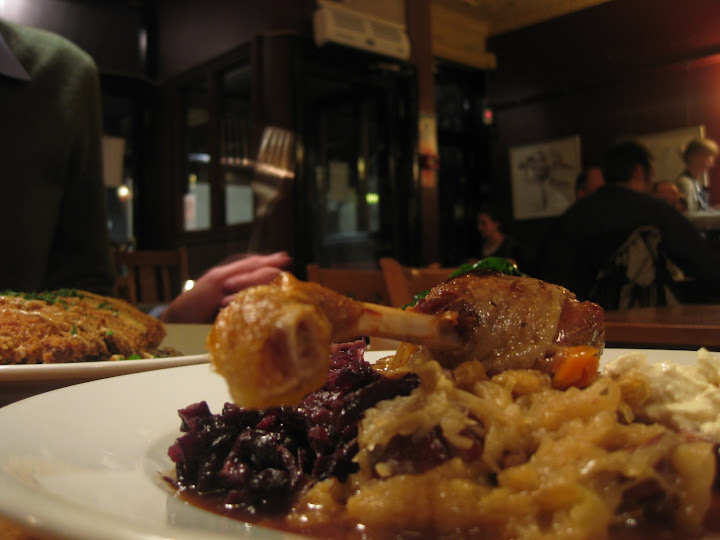 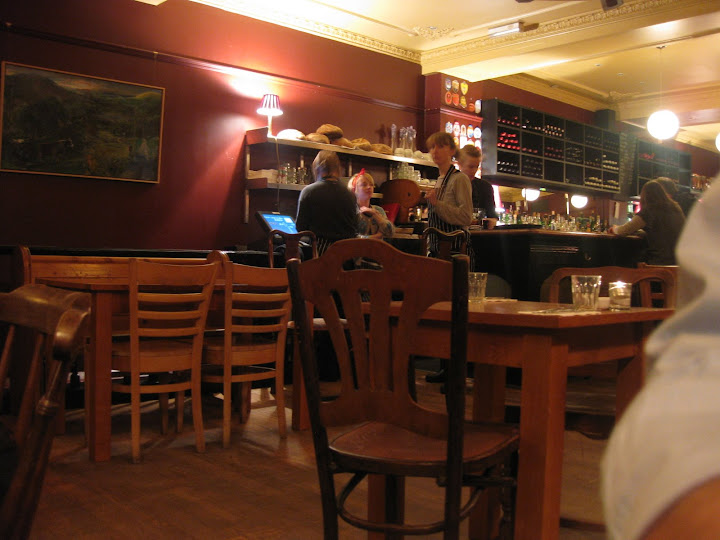 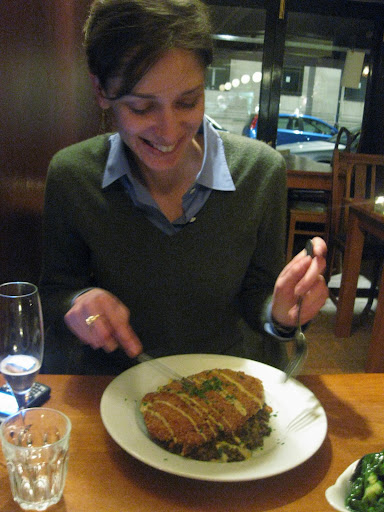 Fresh of the plane from a great holiday back home in the States, I was filled to the brim wit h the tasty ethnic food of New York. The previous day, I'd had bagels and lox for breakfast, Italian for lunch, and a fiery Sichuan dinner from the popular Spicy and Tasty in the very ground zero of America's ethnic kitchen: Flushing, Queens.

So upon my return to London, for onceI felt no great craving for ethinc food of any particular description. After work I took a gander at my favorite London food guide and an idea caught my eye: English food!

Great Queen Street is a warm looking, simple restaurant that fills most of a storefront on this fine street near Covent Garden. Bare wooden table tops and a busy bar in the back half left me feeling quite at home, and I dumped my duffel bag and coat over the empty chair at the next table over.

Ellen had already ordered a kippered fish starter, which came with a tasty egg and endive salad. The menu, filled with things such as dried blood and pig's cheek, made me a bit uncomfortable and for a few minutes I agonized both over what to order and whether or not it was safe to call this an "ethnic" restaurant. I was reminded that if the food makes me uncomfortable, then it's clearly ethnic. I dived in.

I had the duck confit, not being in an adventurous mood, and it was excellent. I sucked the bones dry, although that's something I do so often as to not be a true accolade. We also ordered the aforementioned cheek, which came deep fried in a crusty breading and served over seasonally appropriate lentils. All the ingredients were fresh and delicious and the dishes were well presented. Only the desert, a quince tart of some sort, was something of a miss, mostly due to the fact that it was served with warm, and not iced, cream.

Overall, this is certainly a place I would come back to, which earns it a comfortable four stars. Ellen pointed out, and I agree, that it's a great place to bring guests to show them the ethnic eating of our adopted home. 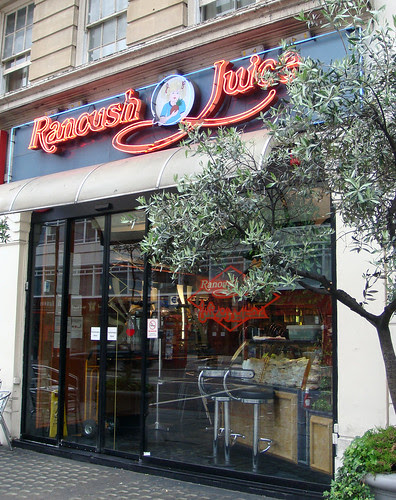 Name Ranoush
Address 43 Edgware Rd
Phone (020) 7723 5929
Web site http://www.maroush.com/
Main dish price range £5-10
Rating 5 Stars. The best restaurant in its genre in London.
Recommended dishes Lamb Shawarma, Hummous
Over the last few months, work has caused me to spend a good amount of time in the Middle East, where I've been cheerfully engaged in my favorite pastime: eating Shawarma. I even went so far as to make a systematic study of the Shawarmas of Tel Aviv. You could say I'm something of a Shawarma expert.
And so it is with great pleasure that I award our first five-star restaurant of this blog: Ranoush on Edgware Road. There's no one secret to a Shawarma: it's a combination of the meat, the bread, the veggies, and the sauce that all have to be exactly right, equally fresh and crispy, blended together in just the right proportions. Ranoush, a member of a large Lebanese family of restaurants which spans a few properties in the area, gets it just right.
It also has the certain authentic touches which a five-star pick requires. Its setting, nestled among sidewalk hookah joints operating happily in the - 5 degree January cold, was ideal. The format of counter service with only too few Formica tables, was spot-on. And best of all the, gracious Levantine service was pitch-perfect. When I pointed out that my order for a side of Baba Ganouj was mistaken for a request for a wrap with the same, the line cook smiled and tossed both in the bag, saying it was "on the house." He also tossed in a full bag of pita bread. And smiled at us again.
I should note that the aforementioned Baba Ganouj and also the Hummus I sampled here were excellent, and would have easily held their own against all but the very best in the Holy Land. This place effortlessly outshines all of the Shawarma joints in New York, although admittedly that may be because most of them are from the Turkish tradition (thicker pita, greasier meat), and my tastes run towards the Arab variety.
This is a place I can see myself going to again and again, and happily so. For a while now I had been wondering what a 5-star ethnic restaurant might be like. Now I know.
NOTE: This restaurant is part of the sprawling Maroush empire, which has half a dozen or so restaurants scattered around Edgware Road. I went on a following night to Beirut Express, which seems to serve the same food as Ranoush Juice, although the format is table service. I can see how some might prefer the more attentive service to that which Ranoush's countermen can provide, but to me ordering directly from the guy carving the meat off the skewer is an integral part of the experience. My 5-stars goes to Ranoush Juice, with a Beirut Express a solid 4-star follow-on. 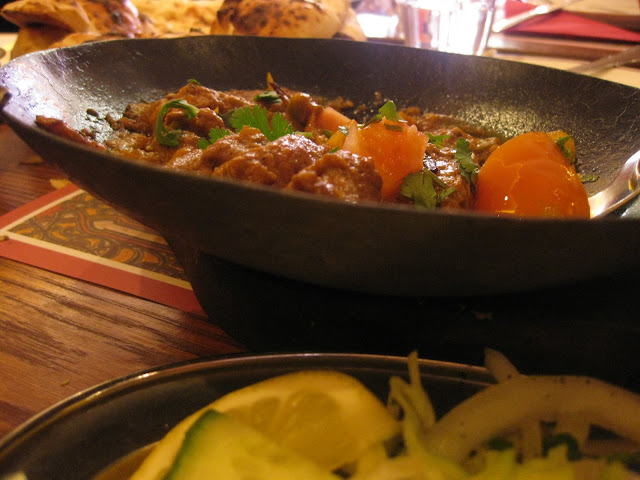 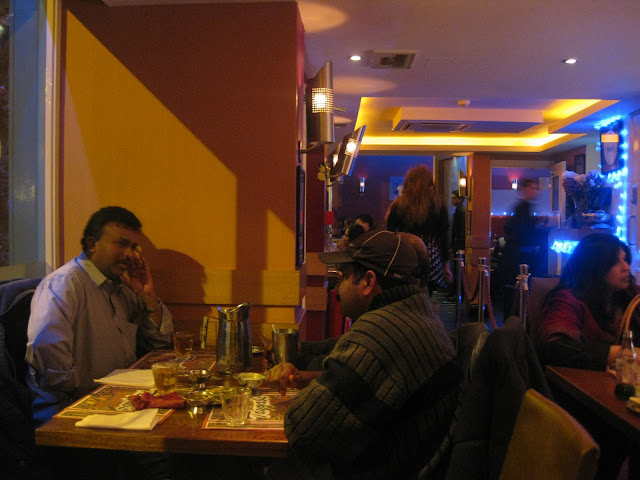 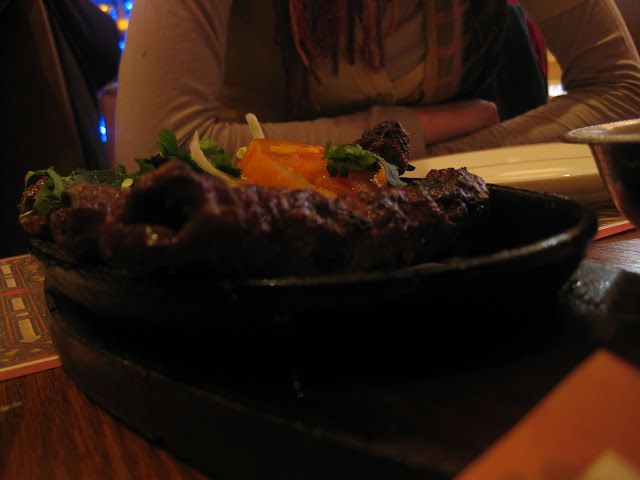 Name Tayyabs
Address 83-89 Fieldgate St E1 1JUPhone 020 72476400
Web site www.tayyabs.co.uk
Main dish price range £5-15
Rating 5 Stars. The best restaurant in its genre in London.
Recommended dishes Lamb Kofte Kebabs, Meat with Bindhi
This is the best restaurant we have yet been to in London. It's is written up in literally every guidebook; which, given the competition, is not really that much of a feat -- what is startling is that despite the attention it is still turning out terrific meals.
On a Sunday night around 9pm the place was jumping, but our party of three managed to get squeezed into a table. The crowd was mostly South Asian, although the décor was the cheap-looking hip and colorful design scheme that appears to be standard issue for popular London places. The waiter called me "Boss" as he seated us and I knew I was in for a treat.
The food is Punjabi -- authentically Punjabi -- which means it’s a lot of grilled meats and fairly thick curries. It's the kind of North Indian food that most London curry shops have modified for English tastes, and it is terrifically refreshing to have in its cream- and sugar-free original. We ordered a set of kebabs (60p each!), and then moved on to a variety of curries, all of which were excellent. The "Bhindi with Meat" was particularly good. The only dish that missed the spot was a Chicken Biryani -- but I should have known better than to order that South Indian classic in a Punjabi joint.
Indeed, the food was so good that after we wolfed it down I seriously considered ordering another round for take-away to have for dinner the following night. The following day, I wish I had. After three months with no 5-star choices, now I've got two in a row! (the other being Ranoush Juice)