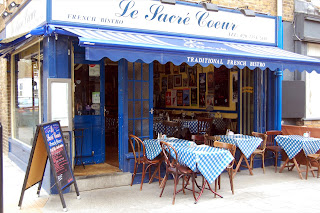 I think this blog is maybe supposed to be about restaurants we recommend and I'm not sure French qualifies as "ethnic," but my experience here this Saturday night was kind of funny, so I'm going to break the rules.

This restaurant is off Upper Street just past Islington Green, where Essex Road splits off. It's on a quieter corner, away from the madness and chain restaurants on Upper Street, and probably has nice outdoor tables in the summer.

I met my friends A. and C., plus their guests, for dinner at 9pm. We were a larger party at 7, and it took a while to be seated. Meanwhile, we wondered at the chairs hanging from the ceiling and walls, and the generally tacky decor. I wasn't put off by this -- my favorite French restaurant in Brooklyn, Provence en Boite on Smith Street, has really ugly decor. For months I refused to go in, primarily because of the lace curtains, but also the yellow walls, the floral cushions, and the tacky posters. Instead I would go to Robin de Bois with its funky taxidermy and outdoor garden, or the neighborhood French favorite Bar Tabac with its wooden tables, art deco posters, and foosball table. But then my mother went to Provence en Boite one morning when she was visitng but before I was awake (so, before 10), and raved about it. And when I finally went I had to concede that the food was far superior to the other French places in the neighborhood. Ever since, I have theorized that perhaps ugly decor correlates to real French cooking, at least at a neighborhood bistro.

The people at La Sacre Coeur did seem to be authentically French. They also had, even for London, an extremely strange service style: A.'s boyfriend asked about which dishes the server would recommend, and the server described one dish as "fucking great." I don't think I've ever had a server use a swear word to me before, but it's an interesting technique. The female servers, on the other hand, weren't so bold, seeming to hang back just out of our lines of sight very awkwardly, so that the last person who'd ordered was obligated to alert the person next to them that it was their turn so that we could get on with it.

I'm not sure if what A.'s boyfriend ordered was fucking great. My beef stew, which was inextricably not Bourguignon (why?) was good, but the "mashed potatoes" were definitely from a mix, an anomaly in a country so fond of mash. The creme brulee was crispy on the top but freezing even right underneath. The portions were almost American sized, so I couldn't even make my grandmother's favorite restaurant comment: Such terrible food, and in such small portions.

The food wasn't awful and the company was great, so it wasn't a complete loss, but unless nothing else was available, I think I'll look elsewhere for my next French meal.