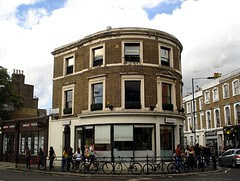 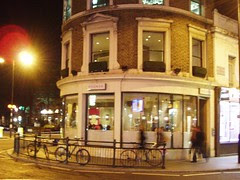 I often say that the Malaysian Pennisula is one of the last bastions of true diversity, with its Malay, Chinese, and Indian communities living cheek-by-jowl in large numbers. The people known as Nyonya's are a clear example of this: long-time Chinese residents of the Malay port of Malacca, who have integrated the regions various cuisines into an entirely delicious synthesis which has come to define Malaysian food on its own. 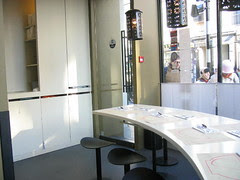 I spent half a year working in Kuala Lumpor, and came to love the food like little else. So its no surprise that as I headed into Notting Hill one weekend morning, I aborted my  plans for a western brunch and dived into this very promising looking restaurant. 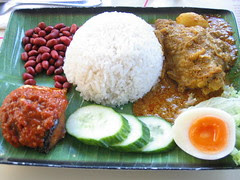 It's owned and operated by the Yeoh family, which emigrated from Singapore, as is described on the web site linked below. The decor is modern, with minimalist table tops and severe looking chairs set within plate-glass windows overlooking the street. It's a nice space, but most truly excellent ethnic restaurants would be too focused on the food to take this much care. Perhaps we can credit the division of labor within the Yeoh family for this excellence on multiple fronts. 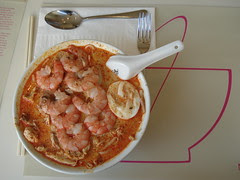 And the food is excellent. I ordered Beef Rendang, one of my favorite Malaysian dishes. It's a unique beef stew, originally from the Indonesian island of Sumatra. It's difficult to cook, especially for westerners, because the process is quite opposite from most of our dishes. We usually sear meat to seal in flavors before combining it with liquid to cook. Rendang begins with beef cubes simmering in liquid (usually coconut milk), which steadily boils down to leave the meat alone searing in the pan. By the time its finished with a dousing of sauce, the meet is both perfectly succulent and nicely caramelized. Since leaving Malaysia, I had never had a good Rendang... until now.

The other dishes we ordered were a Laksa, and an order of Roti Canai, were both well executed, although I feel that both were toned down significantly. The Laksa's I recall eating at lunch in Kuala Lumpor left my shirts covered in sweat and curry sauce alike, the dish at Nonya was significantly more civilized. The Roti dish a favorite of any traveller to south east asia, is a piece greasy fried bread to be dipped in a chicken curry sauce. It was good, but could have been more greasy.

But these are minor nits on the food. Nyonya is one of the two best ethnic restaurants in London I have eaten at so far, and by far the most accessible to western sensibilities. It is highly recommended.
Check out some more resources on this place at the Randomness Guide to London's page on Nyonya.

Hello - I'm glad you like my photo, but under the Creative Commons licence you really do need to attribute it, and I don't think linking to a pile of search results really counts. Could you add a link to the Flickr photo page, please? This also helps out people who want to see the larger version, or indeed use the photo themselves! Thanks.

(You might also want to link to the Randomness Guide to London page, where I've just added a backlink to your review.)

Hi Kake -- thanks again for your photo. I added the link as you requested. Great shot!

Thank you! Though you should probably be doing this for the others too...

Just a heads-up - the chefs from Nyonya have moved to Sedap on Old Street (RGL review).