You might be wondering just who is running Ben's food blog these days, so I figured it's time we actually introduce ourselves.  Many of you are already familiar with the cast of characters that once regularly graced the pages of this blog-- Ben, Ellen, and the lovely Vivian.  We're longtime friends of theirs, and are honored/psyched they asked us to take over the responsibility of running this blog, which we hope can become a trusted resource for ethnic food enthusiasts and lovers of bold tastes all over London. 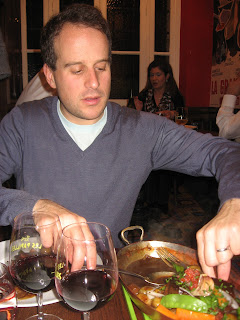 First up, meet Nick.  He and I met a long time ago, when we were still college students, and my tastes ranged from the terrible to the horrifying.  Having grown up in the Midwest, a place not too adventurous on the food front, my favorite foods circa 2000 included the likes of SpaghettiOs and Golden Grahams. (And steak-- I have always loved a good, bloody steak.)  Nick, however, was always a true food adventurer, having grown up in Oakland, California, a land known for its diverse range of cuisines and melting pot of general yummyness.  He convinced me that I could actually like Chinese food, which up until then I thought of as crab rangoon-- deep fried dumplings quixotically filled with cream cheese-- and goopy, corn-starch loaded main dishes. (To this day, I still prefer my Chinese to be of the dry-fried, Sichuan variety.) He also showed me Mexican food at it's finest-- introducing  me to the delicious mole at Oakland's best Mexican restaurant, El Taco Zamorano, and showing me some of the world's best fish tacos at a roadside shack in Tulum, Mexico.


When Nick was living in New York in 2003 he decided he wanted to experience all the wondrous cuisines that the city had to offer, so he bought the very book that inspired this blog, Robert Sietsema's The Food Lover's Guide to the Best Ethnic Eating in New York City.  Soon, he and his co-worker at the time, Ben, this blog's one and only, were organizing treks off to the far corners of  the region-- Newark, New Jersey; Woodside, Queens-- to try out Sietsema's favorite places to get a whole host of  adventurous cuisines, ranging from standards (like Brazilian steak houses) to the uber-adventurous (Uzbek).  The two of them also saw these excursions not  just for what they were, a fun way to fuel up, but for what every food outing has the potential to be: An invaluable experience bringing together and bonding friends.  Two years later many of our ethnic food Sundays, as we called our daytime outings, included 15 or 20 people-- and one time, quite memorably, even Sietsema himself.


Now, meet me, Angie. I've been a journalist at magazines in Washington, DC and New York for the last eight years. For a long time, back in the blog's original heyday, Ben used to joke that he should hire me to move to London and take over his growing food-blog empire. In those days, I wrote a lot about immigration and health care issues-- subjects that fascinate me still-- but food was always a passion.  When I moved to London this May with Nick and became a freelancer, I thought I could finally find some time to give food writing-- and this blog-- a bit of my time and effort.  After all, Nick and I were going to be trying London's best ethnic eateries anyway.  You didn't expect us to spend all our times at gastro pubs, did you?

Other fun food moments from our archives...

Your and Nick's journey through life using food as a vehicle for enjoyment and exploration is so wonderful! This lovely write-up showed me even more about you two than I already knew. And that gray skirt number you're wearing in the photo? Amazing, esp. when paired with the rest of the ensemble including the sunglasses!