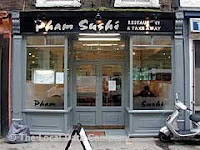 I admit that when my friend M. started raving about a sushi place that I walked by every day on my way to work, on the market street Whitecross, I was a little skeptical. How good could it be? But then I thought about my two favorite sushi restaurants in New York, Jewel Bako in the East Village and Ki Sushi in Brooklyn, a relatively unassuming place (well, they do have a waterfall inside, but the outside is stucco and clearly a former storefront or mobster social club or something else inapposite) on (yes, again) Smith Street. Jewel Bako is beautiful, but also not the place everyone flocks too. And I've been to Nobu and Nobu Next Door and that's good and all, and I admit I've never been to Yasuda where I've heard the sushi described as being "like candy." But really, what I want out of a sushi restaurant is delicious fresh fish served at the appropriate temperature (i.e., not freezing cold) in delicious combinations.

Pham Sushi definitely delivered. Not fancy at all but not quite what I think people here mean when they say "cheap and cheerful" it's a bit too brightly lit but not ridiculously so. The starters were ordered were good -- edamame (hard to mess that up), miso soup, and Japanese spring rolls, pork gyoza, and a really good salad. And the fish is great. We had scallops and three different rolls, all of which were delicious. For £20, on my way home from work, I'll be going back often, and I won't doubt M. again.